It is so refreshing to see a city as vibrant and full of life as New York renew itself and remain the center of the universe from so many perspectives. The restaurants are cutting edge, technology is invented and some of the most creative minds in the world live there. As the world’s population increases and demographics shift, New York has done a wonderful job of going with the flow, instead of trying to swim up stream like so many other cities do.

Chelsea and the Meat Packing District are prime examples. It wasn’t long ago that Chelsea was anything but a fashionable area. The Meat Packing District was where beef was butchered during the day and hit men butchered victims at night. No more. Most of the warehouses that aren’t still functioning meat packing operations have been transformed into upscale restaurants, shops and loft style apartments. The residents in the area tend to be young, well educated people with good jobs and salaries. After all, how else are they able to afford $18.00 cocktails?

Chelea is primarily a residential area on the West side of New York. Many of the apartment buildings were originally built to house thousands of people who worked on the Chelsea Piers. The area is also rich in art and is home to over 300 art galleries and countless art studios. 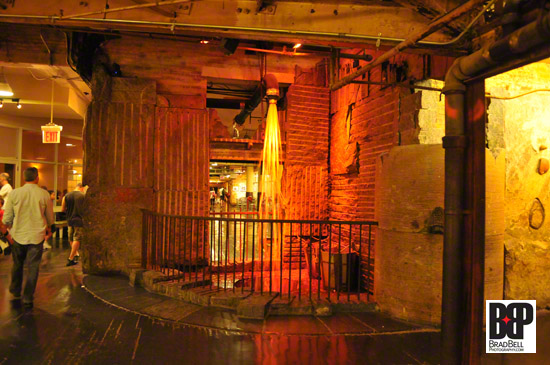 Chelsea Market, in the former Nabisco building where the Oreo cookie was invented, is a renovated warehouse that is now occupied by upscale grocery, fruit, seafood and flower markets, in addition to bakeries, a wine store and the restaurant Buddakan. It is also home the Oxygen Network and The Food Network where Iron Chef America and Emeril Live are filmed. EMI Music Publishing is a resident of the building as well.

The Communal Table at Buddakan

The reception area of Buddakan is adorned by an enormous tapestry that hangs behind the large hostess desk. Up a few steps and you are in the very chic lounge and bar area with an uber modern Asian decor. The restaurant is divided into several dining rooms, each with a unique decor. Down a large stairway is the Grand Hall that includes an enormous communal table that seats 35 people.

The food is an amazing blend of Asian inspired noodles, sauces and veggies that accent the fish, beef, pork, chicken and duck. We started with the Lobster Egg Rolls and they were outstanding. The combination of lobster meat, fresh cabbage and mint, rolled up in a wanton pastery and served with a sweet chili dipping sauce was awesome.

The Roast Duck Noodles was not only beautiful in it’s presentation, but a flavorful bowl of broth, noodles and slices of succulent duck on top.

The Shrimp and Lobster Chow Fun was a stir-fry style combination of noodles, lobster, shrimp and their famous “xo sauce” that pulled the dish together with an excellent flavor that had a bit of a kick to it. We were very pleased with our meal at Buddakan in the Chelsea Market.

The next time you are in New York, check out Chelsea and the Meat Packing District neighborhoods. You won’t be disappointed.