Trumpets on the Mexican Riviera

We paid dearly for the hotel’s car to pick us up from the airport in Cancun for our 55 minute transfer to Playa del Carmen. Having been to Mexico several times before, and even fallen prey to two of the biggest tourist scams in the country, we knew it was better to be safe than sorry since we wouldn’t need a rental car for our long weekend stay in Playa. Paying off police officers who stop tourists in rental cars on their way to the airport only fuels the corruption fires that burn throughout Mexico.

The atmosphere on the flight to Cancun was even more festive than a flight to Las Vegas. After all, nobody is flying to Cancun for business. Everyone is headed for a vacation and many of us began our libations prior to take-off. The group seated in front of us apparently got toasted on their flight from Milwaukee to Atlanta, and were in party mode complete with cameras and multiple hats as they enjoyed a pre-departure beverage on the plane. At least two wedding parties boarded our plane and the flight attendants joined in the fun with humorous announcements and free flowing beverages.

When we landed in Cancun, the entire plane cheered as everyone was more than ready to begin their days and nights of sun, sand and sin. The one remaining obstacle in the way of our celebratory birthday weekend was getting to Playa from the airport. Time slows down a little in Mexico, and it first hits you in the face during the hour long wait for luggage to arrive in Baggage Claim.

Luggage claimed and Customs cleared, it’s time to kick this party into gear. We’re met by the hotel representative who is holding a sign with our name on it. He guides us through the Arrivals Hall and out to the parking lot where dozens of white Suburbans are in line to pick up vacationing guests and whisk them off to their resorts and hotels.

We are told to wait on the curb for our chariot to arrive. After taking a few snapshots and waiting about 20 minutes, I notice our guy talking to what must be his friend, the driver of a little blue taxi. A few minutes later, we are escorted down the long line of white Suburbans, passing each of them and wondering which one is ours. At the very end of the line, we look up in horror to find our worst nightmare, the little blue taxi. 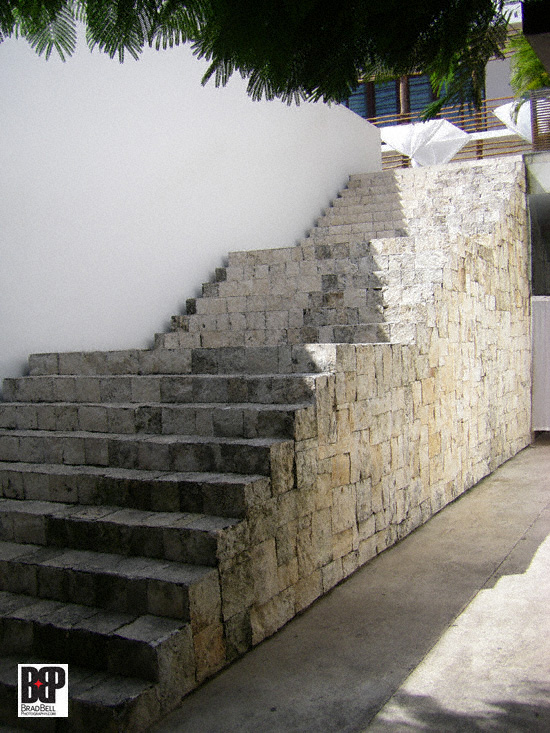 We strive to enjoy a certain level of comfort on our trips. Yes we have ridden in Jeeps, small planes that scared the crap out of us, trains, boats, hundreds of taxis and even elephants on our journeys, but pouring ourselves into a tiny blue taxi in Mexico for the 55 minute ride to our hotel was not really the way we had pictured the beginning of our birthday celebration weekend in Playa.

The heated discussion with the hotel’s representative lasted for about 60 seconds while he insisted that it was, in fact, the “hotel car” and reluctantly let them load our luggage while we inserted ourselves into the back seat. How bad could it be? After all, we were in Mexico and we will be at the hotel soon. OK, let me rephrase that. Oh my god, we’re in a tiny blue tin can in Mexico, knees folded up under my chin, head hitting the fringe hanging from the sun shade in the rear window, bouncing over the bumps and pot holes on our lovely 55 minute ride to the luxury and comfort that awaits us in beautiful Playa del Carmen.

For anyone who have never been, Playa del Carmen is an old fishing village that has become very popular with tourists over the last 10 years. The main street is Fifth Avenue which is pedestrian only. There are a few other side streets and by “streets” I mean cobblestone and brick. Our driver, who apparently had been watching me in his rear view mirror and eventually asked if I was “OK” after 50 minutes of my head bobbing up and down and what must have been a less than enthusiastic expression on my face, stops the car at the end of a streets and asks us which hotel we are going to! This was the driver of the “hotel car” asking what the name of our hotel was! He starts walking down the street to apparently find the bellboy who will be coming for our luggage. He leaves the car running so the air conditioning stays on, but does nothing more than take the car out of gear as the two of us remain folded up in the back seat. A few minutes later, we notice the car is beginning to roll forward, towards the pedestrian only street! Fortunately for us, the parking brake was within reach and held the car in place long enough for us to get out.

Our hip, young, trendy hotel with a disco pool.

Back down the street comes the driver. Alone. He tells us that our hotel is just down the block and around the corner. The temperature is a pleasant 82 degrees and we are still dressed in jeans and long sleeves having just departed Atlanta in January. The cobblestones are making the most lovely clappity-clappity sound as we pull our duffles, roll-aboards, back-packs and carry-ons down the quaint, charming Mexican street towards Fifth Avenue. As we turn the corner, we realize we have been in the shade and are now hit smack in the face with the blazing sunshine that is so Mexican. As we start to carry our luggage up the 50 steps to the main level of the hotel, we are greeted by a young man who welcomes us and grabs one of our bags.

He was a friendly young man and he welcomed us to the Hotel Deseo. “How was your trip from the airport” he mistakenly asked. The degree of severity and tone of voice used to deliver my response was directly related to how many times my head hit the roof of the car, how many hours those 55 minutes seemed to last, and how numb my legs were after being folded under my chin for what seemed like eternity. Apparently my reply caught the young man off guard as he snapped his head back sharply, as if to avoid the strike of a cobra that was just a few feet away. He then asked if it was our first time in Playa. From the look on his face, I’m guessing my answer was not what he expected to hear. As he hurriedly fumbled with the paperwork, he ended this part of our conversation with a cheery “Happy Birthday”!

Up the stairs we went with luggage in tow. We followed him to a room located right next to the kitchen area where breakfast would be served each morning. The description on the website and the photos we had seen told us this was one of the hip, young, trendy boutique hotels in Playa, and the minimalist décor, adult-only environment and disco lights at the pool right outside the door proved the point. The room was tiny, had no window and would be noisy next to the kitchen that would be filled with clanging dishes very early the next morning. We asked if there might be another room available.

I don’t know if it was because the hotel had been told in advance that we would be celebrating my birthday that weekend, or the overall first impression I had made that could have been construed as my being a somewhat less than happy camper, but the guy returned a few minutes later with the key to a second room. This room was huge with 2 king size beds and a bath tub in the middle of the room. The two corner walls were actually sliding glass doors that opened to a balcony overlooking Fifth Avenue. As the air conditioning started to cool down the room, I too began to cool off and settle in for what I was hoping would end up being a fun and relaxing weekend.

Just what the doctor ordered.

We quickly changed into shorts, t-shirts and sandals, and headed to the pool for a margarita and a snack. The drinks were small and probably expensive which can only be expected from a hotel. The guacamole was amazingly fresh and the stress of the day was quickly fading with each mouthful of food and drink. Ah, Mexico. Let the Fiesta begin.

Our first meal in Playa was at a traditional Mexican restaurant where we had eaten on previous trips. We snagged a table on the street and were quickly serenaded by one of the Mariachi bands that wander from restaurant to restaurant in search of a tipping audience. The bands are typically about 6 people including a bass, guitar, violin, accordion and the always present trumpet. Anyone who has ever heard a Mariachi band knows how the sound of the string instruments  form the melody that is punctuated with the high pitched brass that can only be a trumpet. It had been a long travel day so after dinner we headed back to our hotel shortly before midnight (1:00 a.m. Atlanta time). The disco at the hotel’s pool was in full swing, albeit only about 20 people in attendance. We knew that since our room faced Fifth Avenue, it would probably be an hour or two before the street noise quieted down and the Mariachi bands went to bed. What we were about to discover was the fact that the large disco in town was right next door and was just opening its doors on this popular Saturday night in Playa.

They always seem to be in tight pants.

Cancun is located at the tip of the Yucatan Peninsula which juts out into the Gulf of Mexico. It has amazing sunshine year round and attracts tourists from all parts of the world. If you don’t travel much, you may not be familiar with the issue of time zones. As the sun rises in your part of the world, it sets in other parts and it’s the middle of the night elsewhere. That means some people will be wide awake in the middle of the night when it is actually day time where they are from. Then there are those people who are wide awake in the middle of the night because the f*ing Mariachi bands are still playing with trumpets blazing at 3:00 a.m. on the street directly below the sliding glass doors that provide amazing views but do absolutely nothing to block the sound. And let’s not forget the disco next door and the droning of the bass that is thumping through the floor of our hotel room. Until 5:00 a.m. On my birthday weekend. In our luxurious suite. In Mexico.

With a 20 year long relationship under our belts, we didn’t have to say a word to each other the next morning when we realized the horns had stopped and the floor was no longer vibrating. We grabbed the laptop and started looking for another place to stay. 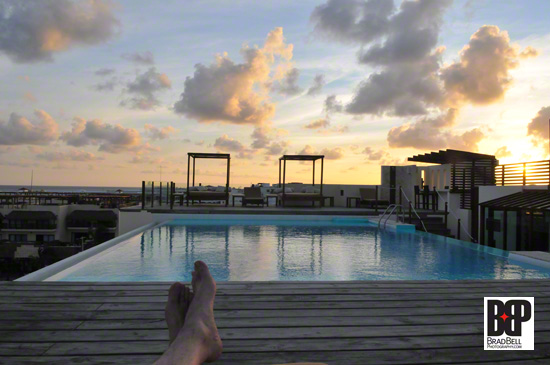 Fortunately we were quickly able to secure a reservation through Airbnb for a condo which turned out to be brand new, in a great location and owned by a really nice guy who quickly accommodated our situation. One block off the beach, we had a great weekend in spite of our arrival issues. Feet in the sand and margarita in hand. Oh, and the roof top pool didn’t hurt either!

This entry was posted on March 21, 2012 by Brad Bell Photo. It was filed under Blogging, Celebrations, Food, Love, Photography, Travel and was tagged with BradBellPhoto, food, Mexico, photography, restaurants, travel photography.