After the recent program was over and the group we were hosting left town, we stayed in the city for the weekend to recuperate. Some flights didn’t depart until mid afternoon so by the time we saw everyone off and changed hotels, it was time for a very late lunch. Just a few blocks away from our hotel was the iconic 21 Club and since neither one of us had ever been, we decided to go try their famous burger. Who knew we were in for a special treat, and I don’t mean just the burger.

Since the dining room doesn’t open until 5:30 and gentlemen are required to wear sport coats or suits, we knew we would be eating in the bar. There were very few people in the bar on this Friday afternoon at about 3:30. Walking through the bar we had to carefully avoid some very familiar equipment. Turns out there was a photographer from the New York Times in the bar shooting photos of the various cocktails the bartender was preparing for the food section of the newspaper.

The entrance to 21 Club is lined with lawn jockeys donated by patrons.

We were immediately seated in the red leather wing back chairs near the fireplace at the end of the bar. While we sipped a beer waiting for our burgers to arrive, I was fascinated by watching another professional photographer do his thing. Each time he pulled out a lens or a flash, I said to myself “I have that, I have that also.” It was refreshing to see that we both shoot with the exact same Nikon equipment since many photo journalists shoot with the less expensive Canon brand. 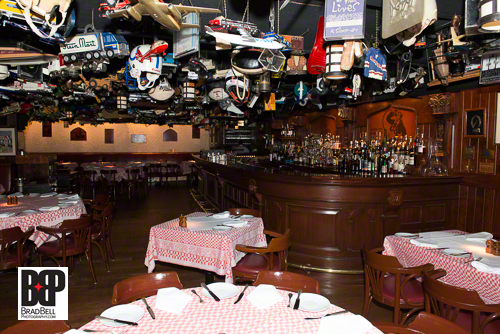 The main dining room at 21 Club features thousands of vintage toys hanging from the ceiling.

Our burgers arrived quickly and were amazingly tasty. 21 grinds their own mix of beef, bakes the rolls and serves them with caramelized onions, lettuce, tomato and pickle. The fries come with their own special mix of “tomato sauce” for dipping. A larger version of the very same burger is served at dinner in a slightly more elaborate manner, but at $32.00 for dinner, we felt like we were cheating the system by comfortably sitting in jeans and button down shirts and ordering from the bar menu where the burger is a “bargain” at $18.00. 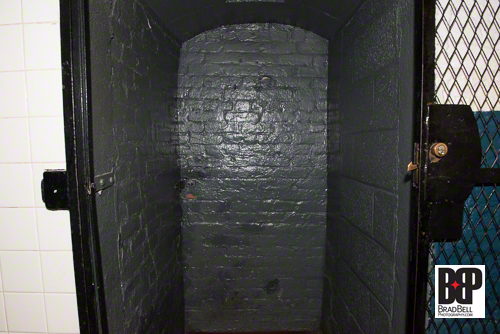 This alcove in the basement is actually the hidden 2,000 pound door to the wine cellar.

We began chatting with the restaurant’s public relations person who was there assisting the photographer. When she found out I was also a photographer, she invited us on a private tour of the famous wine cellar. She was still busy with the Times photographer so another gentleman escorted us through the restaurant, into the kitchen and down the stairs where he told us the story of how the restaurant was originally opened as a speakeasy during prohibition. When Walter Winchell, gossip columnist at the Daily Mirror, was banned from 21, he wrote a column noting that 21 had never been raided by Prohibition agents. The next day, 21 was raided. 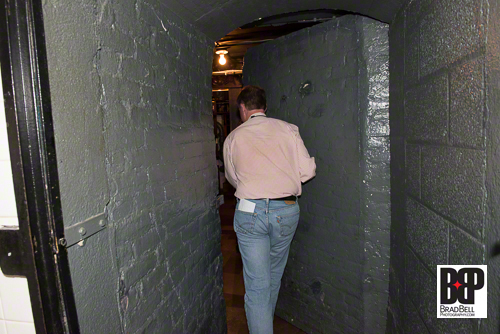 Behind the hidden door is the infamous cellar, home to 20,000 cases of wine.

The owners, Jack Kriendler and Charlie Berns purchased the townhouse next door and had a hidden, 2,000 pound door installed that leads to the basement of the house next door where the current wine cellar is located. That way the employees could honestly answer that they had no alcohol stored on the premises. Today the cellar is home to twenty thousand cases of wine including several private collections. The center of the cellar is a private dining room that seats 24.

One of the original carved wood booths is installed in the corner of the wine cellar.

Our private tour was incredibly interesting and completely unexpected. It sure made me want to return to 21 Club for a proper dinner on a future trip to the city. I left feeling like I had experienced yet another thing that most people will never see.

The table will comfortably seat 24.

As I have said before, it is tremendously satisfying for me to photograph people, places and events, knowing that those memories will be forever frozen in time and that the memories will instantly return to the people involved simply by looking back at those photos. 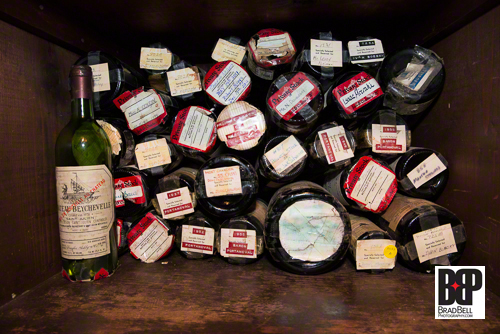 The cellar also contains private wine collections that belonged to wealthy patrons, celebrities and past presidents.

From a delightful cruise in a yacht around Manhattan, to the floor of the New York Stock Exchange, to seeing Tom Hanks on Broadway and the hidden gem we found in the basement of an iconic restaurant, it was a great way to end a very special week in New York City.

This entry was posted on July 11, 2013 by Brad Bell Photo. It was filed under Blogging, Food, New York, Photography, Travel and was tagged with BradBellPhoto, food, New York, restaurants, travel, travel photography.