We took our first trip to Europe at Christmas in 1991, particularly because traveling on Christmas Day used to be rare and the Business Class cabins were mostly empty. In full disclosure, we were also skipping out on the usual family drama and all of the holiday hustle and bustle. There is something to be said for coming home to no holiday decorations and a clean start to the new year.

We have switched things up a bit from year to year but two cities that have remained constants are Amsterdam and Paris. Both are picturesque, romantic and heavily decorated for the holidays. Amsterdam has finally developed their culinary scene somewhat and now offers several restaurants with fresh, professionally produced dishes. Service often remains spotty but things are improving.

A few years ago we decided on our holiday trip we would seek out snow and Christmas Markets. However, “the best-laid plans of mice and men often go awry.” Temperatures in Amsterdam were in the 40’s-50’s so no snow. They did have an exhibition of holiday lights on the water where local artists displayed interesting works of light. We took a late afternoon canal boat tour to view the art on display.

After a few nights in Amsterdam, it was time to board the high-speed TGV train to Paris. The “City of Lights” isn’t called that for no reason. The holidays are especially beautiful with Christmas decorations everywhere and one of Europe’s larger Christmas Markets running down both sides of the Champs d’Elyse. Again it was unseasonably warm and there was no snow anywhere.

It doesn’t matter the season nor the weather, after traveling the globe rather extensively, Paris remains our favorite city in the world. She never fails to take our breath away, fill us with emotions and deliver the goods – food! Our feeding frenzy included our usual list of favorite restaurants (Josephine Chez Dumonet, L’Ardoise, Chez Andree, Le Comptoir du Relais, Le Coupe Chou, etc.).

A twist we have added in recent years to keep our usual trip interesting includes adding a few days at the end of the trip in a nearby town no more than an hour or so drive to the Charles de Gaulle airport for our flight home. In keeping with our theme of Christmas Markets that year we headed to the largest Christmas Market in Europe, Strasbourg.

Whadda Yuh Mean There Is No “WeeFee” On This Train?

We boarded our train from Gare d’Lest to Strasbourg thinking we would have 2-1/2 hours of internet time to work and get caught up on blog posts for this trip. So far there has been very little down time for things like writing or editing photos, not to mention my real job. I always plan on getting some work done on the plane or train but alas, “there is no WeeFee on this train.”

About an hour into our ride to Strabourg the landscape started to become dusted with snow! Twenty minutes later the rolling hillsides are completely white. The unusually blue winter skies we had in Paris have been replaced with the typical bright but totally overcast sky that I remember from most of our Holiday trips to Europe.

Leafless trees looked cold and lonely, barren except for the round balls of mistletoe growing atop many of them. There were no farm animals in sight as we passed through acres and acres of pastures and fields. Even our fellow passengers on the train were quiet as they gazed out the windows into the cold but pretty countryside. 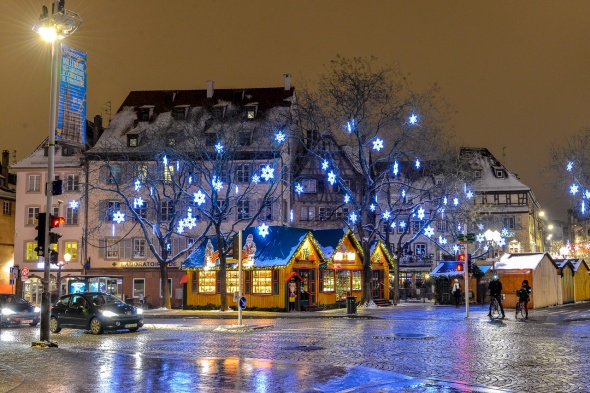 Strasbourg and its neighboring town of Colmar are known for having the largest Christmas markets in Europe. It was December 30 which means the following day was the last day of the markets as they wrap things up for the new year. I hoped the snow would just add to the festive holiday feeling that I expected of our first visit to Strasbourg.

We checked in to a brand new Holiday Inn with a balcony view just outside the city center. It was no more than a 10 minute walk into town and the Christmas Wonderland of Strasbourg. Each of the town’s squares were jam packed with small wooden “booths” selling everything from hand carved wooden Christmas ornaments to caps and scarves to specialty sausages and cheeses and my favorite, hot spiced wine. The heat from the cup warms your fingers while the wine itself does a great job of warming your insides.

For anyone who enjoys Christmas, the decorations and lights, the holiday mood and merriment and is looking at a trip to Europe, I would highly recommend Strasbourg as it is the real deal.

This entry was posted on November 4, 2018 by Brad Bell Photo. It was filed under Amsterdam, Blogging, Celebrations, Europe, Food, Paris, Photography, Strasbourg, Travel .